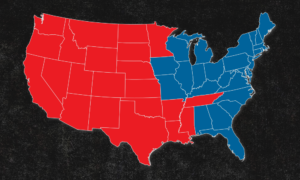 Chances are, if you’re into basketball, that you know all about the NBA All-Star weekend game, but in case you don’t, here’s a brief summary. Taking place each year just before the playoffs, it pits the best NBA players against each other. Although last year saw a change in the institution with Team Lebron competing against Team Giannis, the All-Star used to feature the best players from each Conference putting on display their impressive skills. So, what’s the All-Star game’s significance in this context? Well, in a game in which the top stars of each Conference compete against each other, the West has won 7 out of the last 9 clashes against the East.

For those not familiar with the NBA, the league is divided up into two Conferences: East & West. Each Conference has fifteen teams competing to reach their respective playoffs, then the Conference Finals, and finally the NBA Finals. There are few crucial components that affect the perception of each Conference, and it’s not just their geographical location: it’s the reputation of the teams, the players’ performance and stats, and of course their regular season NBA record.

The Western Conference in the NBA has long since been far superior. It’s been that way since Michael Jordan left Chicago, along with his 6 championship wins, and the Spurs drafted Tim Duncan. The West had a better head-to-head record every season since 1999-00 – the sole exception being the 2008-09 season. In addition, since Michael Jordan’s last title with the Bulls in 1998, Eastern Conference teams have only won the NBA title on 7 occasions; during the same time the West has recorded 14 wins.

Since LeBron’s move to the Los Angeles Lakers, the West not only has the best teams, but also the biggest stars. Every player in the All-NBA first team 2018 was playing in the Western Conference, while in 2019 the sole exception was Giannis Antetokounmpo. So while the West keeps filling with stars, the East starts to look a little empty with the exceptions of KD, Irving, and Giannis.

For the last 7 years, the Western Conference Finals have attracted greater attention and interest than the actual NBA Finals. With fans calling them the ‘’real Finals’’. Whether it’s the Warriors, the Rockets, the Blazers or the Spurs, they’d all be considered the NBA odds-on favourites to win, no matter which of them made it to the Finals.

The NBA map looks chaotic. For the fans, it has changed for the better; the competition is growing as well as the number of strong teams. The West’s confidence was shaken last year with Golden State’s dominance coming to an end by a Leonard-led Toronto. Following his defection to the West though, for the sake of the Clippers, can another Eastern team challenge the wave of All-Stars that will come crashing down for the West?

Want to know the latest in all things NBA? Then you’ll be right at home with the expert basketball predictions featured at bwin news.