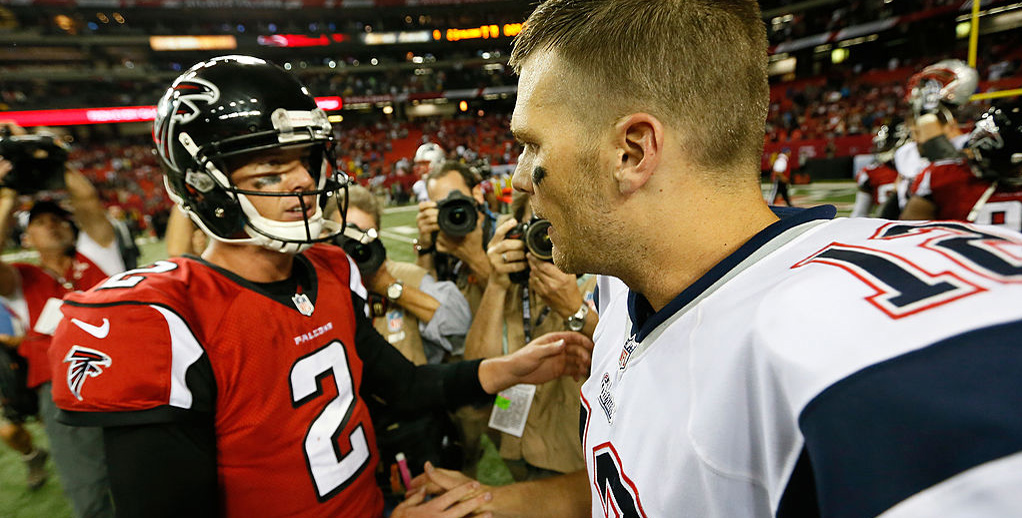 Super Bowl LI on Sunday will be all about the two quarterbacks: the legendary Tom Brady features in his seventh championship game, having won four of the previous six, while Matt Ryan – eight years his junior but his main rival for the MVP award – has reached this stage for the first time in his career.

Our man Liam Blackburn was at the Super Bowl LI Opening Night in Houston on Monday and asked the two stars’ coaches, team-mates and opponents what they thought of them. See what they had to say in the graphic below, along with Brady and Ryan’s key stats and some words from the main men themselves.

Starting with the numbers, Ryan has been the more productive of the two overall. The younger man has passed for almost 1,400 more yards than Brady in the regular season, which works out as an additional 12.8 yards per game. He’s also registered 10 more touchdown passes and made almost twice as many interception across both the regular season and the play-offs combined.

When we asked them about Super Bowl LI, Brady focused his words on ensuring that his team finish what they’ve started – a nod to his renowned competitiveness – while Ryan spoke more about the good feeling around his team and their game plan for Sunday.

Both men have clearly worked hard to get to this point, with New England’s head coach Bill Belichick insisting that his star man has earned all of the superlatives that have been flung his way. Assistant quarterbacks coach Jerry Schlupinski, who naturally works closely with Brady, puts it down to “his work ethic and his passion”, adding that “his preparation is unbelievable” and “his will to succeed is as good as anyone I’ve ever been around”. Belichick’s opposite number, Atlanta Falcons’ Dan Quinn, thinks that Ryan has put in the tough work required to break through the ceiling separating the really good players from the greats.

When you ask Tom Brady’s team-mates about what makes him a great quarterback, the most common response is his competitiveness. Wide receiver Michael Floyd calls him a “fierce competitor” and “the most passionate dude I’ve ever met playing this game”, with linebacker Shea McClellin adding that he’s “one of the biggest competitors I’ve ever been around” and that this regularly helps out the defence.

Praise for Matt Ryan from among the Falcons’ ranks is centred more around his mental strength. Taylor Gabriel, the wide receiver, is proud of his quarterback and joked that he “has ice in his veins” while cornerback Desmond Trufant said that he knew from the beginning that this was going to be a great year for Ryan given the confidence and belief that he’s been playing with. Gabriel also spoke about the importance of Ryan’s consistency in raising the level of play around him, before offering a more emotional assessment: “I love Matt. Matt’s my guy”.

A discussion of the two Super Bowl LI quarterbacks wouldn’t be complete without asking their opponents what they thought. It will come as no surprise that the Falcons – just like gridiron fans everywhere – have plenty to say about Tom Brady. Linebacker Vic Beasley thinks that “his game is impeccable” while defensive tackle Ra’Shede Hageman didn’t mince his words, saying simply: “We are going against Tom Brady – he is a GOAT (greatest of all time) – let’s keep it real.” Desmond Trufant echoed that Brady was “one of the best” but was confident that his team could disrupt Brady, saying that “pressure makes it hard on any quarterback … if we get the ball out from these guys, I think we’ll be alright”.

Matt Ryan hasn’t yet reached Brady’s legendary status but there was still plenty of praise from the other camp. Bill Belichick thinks that “there really are no weaknesses” in Ryan’s game and that “he is a tremendous player”, while one of the men tasked with stopping him, Shea McClellin, was clear about the threat that Ryan poses. He described him as “the toughest quarterback we’ve faced so far” and that the Falcons “can make an explosive play … plays that go 30 or 40 yards” which his defence will need to limit.

Whichever team prevails in Super Bowl LI on Sunday, it is almost certain that one of the quarterbacks will be the man to make the difference, so we should be in for a treat as we watch a duel between two players likely to go down in history among the game’s greats.